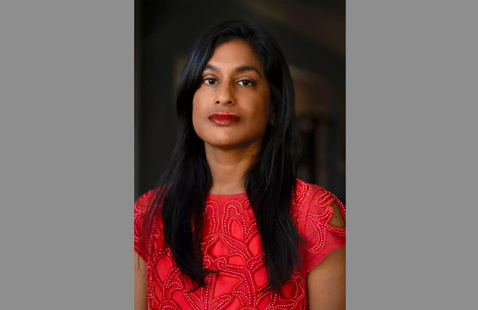 Vauhini Vara was already an award-winning technology reporter when she released her debut novel, The Immortal King Rao, to widespread acclaim. Moving from rural India to the explosion in the computing sector in the second half of the 20th century to a startling vision of our near future, in which big data and algorithms have swallowed up the old political structures without solving our ongoing political problems, Vara has orchestrated an incisive and moving exploration of our most pressing issues, and what they might mean for the future of humanity. Declared “a monumental achievement” by The New York Times, The Immortal King Rao was selected as a New York Times Editors’ Choice, the winner of the Atta Galatta — Bangalore Literature Festival Book Prize, and the Rosebud Award for Fiction. It was shortlisted for the Center for Fiction’s First Novel Prize, and named a Best Book of the Year by The New York Times, NPR, and others. Vara will be joined in conversation by Fairfield professor and National Book Award-winning author Phil Klay.

Vauhini Vara was born in Saskatchewan, Canada, as a child of Indian immigrants, and grew up there and in Oklahoma and the Seattle suburbs. Her debut novel, The Immortal King Rao (W.W. Norton), will be followed by a story collection, This is Salvaged, in 2023.

Vara studied creative writing at the Iowa Writers’ Workshop, and her fiction has been published in McSweeney’s, Tin House, Zyzzyva, and other journals. Her essay in The Believer about grief, “Ghosts,” also adapted for a This American Life episode, will be anthologized in Best American Essays 2022.

In 2020, her oral history of globalization in Businessweek won a South Asian Journalists Association Award and was longlisted for a One World Media Award. A piece in The Believer about tiny houses won a National Association of Real Estate Editors Award. Past journalism has been honored by the Asian American Journalists Association, the International Center for Journalists, the McGraw Center for Business Journalism, and the International Journalists’ Programmes. Her fiction has received an O. Henry Award, as well as honors from the Rona Jaffe Foundation, the Canada Council for the Arts, MacDowell, and Yaddo.

Vara is a mentor at the Lighthouse Writers Workshop’s Book Project and the secretary for Periplus, a collective mentoring writers of color. She also sits on the board of the Krishna D. Vara Foundation, which awards an annual scholarship to a graduating high school student at Mercer Island High School in memory of her sister Krishna, who died of cancer in 2001. She lives in Colorado with her husband, the writer Andrew Altschul, and their son.